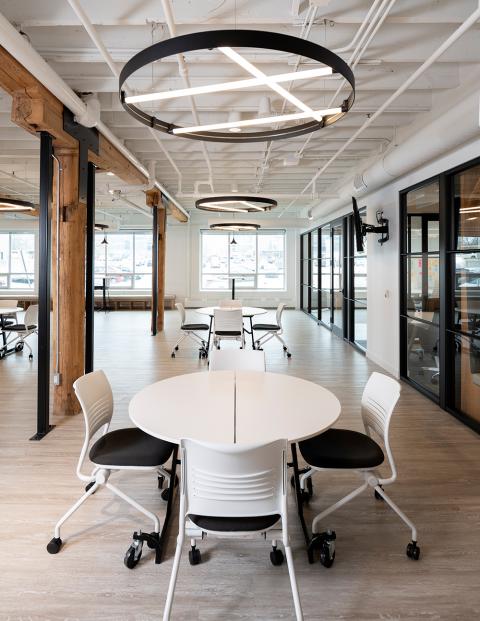 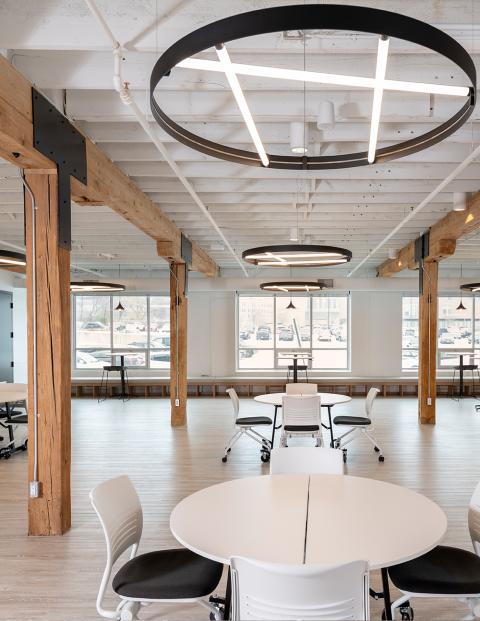 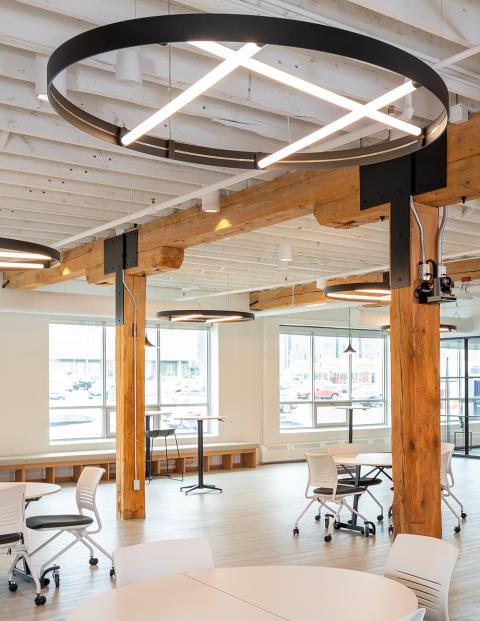 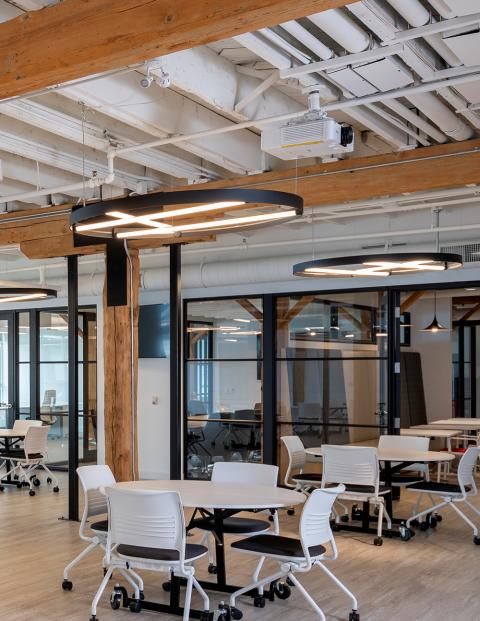 As part of the Lazaridis School of Business and Economics at Wilfrid Laurier University, the Lazaridis Institute supports high-growth technology companies through research, programming, and education. So, it proved to be an interesting juxtaposition when the Institute selected a turn of the century building in Kitchener, Ontario, as the base for its new Executive Development Center.

The circa 1900 building was the former home of a manufacturer of wooden seats for theaters and arenas. Exposed wood ceilings, structures and columns formed the foundation for what was to become a sophisticated, upscale office and event space for the Institute.

Dfy Studio was hired to design the transformation from old to new, developing a modern facility that supported the existing elements of the space.

“We had beautiful bones to work with,” said Tahani Gunal, senior designer at Dfy. "We wanted the elements of the lighting and walls to create a clean, crisp, and vibrant environment."

The exposed ceiling in the main event room posed a challenge for lighting. Fixtures needed to hold their own in a space that already had a lot going on with open beams, pipes and duct work. And the space itself would serve many functions, from presentations to social events to breakout meetings. The designers needed a fixture that would not only provide versatile lighting for the varied functions, but would be dynamic enough to add the "wow" factor they wanted to achieve for the space.

The multi-award-winning Arena was the lighting system of choice. A unique magnetic ring by Eureka Lighting, twelve Arena fixtures were placed across the industrial ceiling. Arena’s seamless circular profile has a discreet, innovative low-power ring and instant magnetic connections. Light sources can be placed, without tools, anywhere along the ring to create a unique lighting environment.

Three Slice luminaires are attached with magnets across the 54” diameter of each Arena. Slice features an 8W LED linear light engine with a custom-engineered acrylic diffuser, which can be rotated 180° on-site. The institute has the option to angle the diffusers down to provide direct illumination to a meeting table set-up below, or it can turn them upwards to provide dramatic indirect illumination to the wooden ceiling above for a reception or more informal atmosphere.

What is also unique about this combination of products is that each Slice can be arranged, and re-arranged, in multiple configurations to suit the event. The luminaires can be placed 360° around the Arena, they can be flipped between upper and lower positions within the ring, and they can also be overlapped to create unique, eye-catching patterns. The luminaires are as modular and versatile as the furniture and space they are illuminating.

“Arena’s size was the right fit for the large event space,” Gunal said. “And Slice adds style and uniqueness to enhance its surroundings. Together they add to the appeal of the space without taking away from its original beauty.”

Wilfrid Laurier University and the Lazaridis Institute love the look and feel of the new space, as does the designer.

“Arena exceeded our expectations,” said Gunal. "We are really pleased with the final outcome."