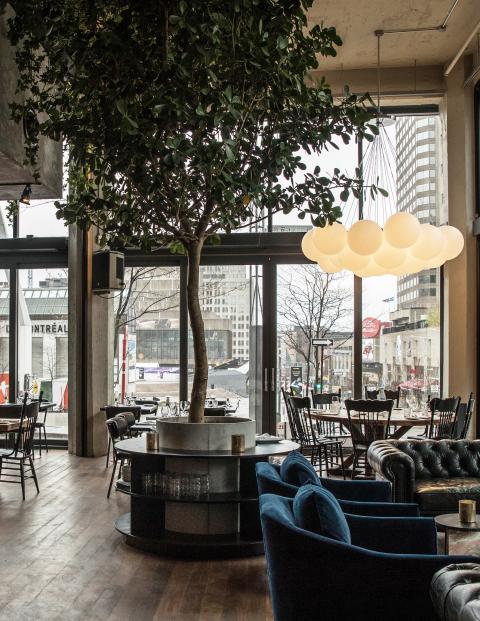 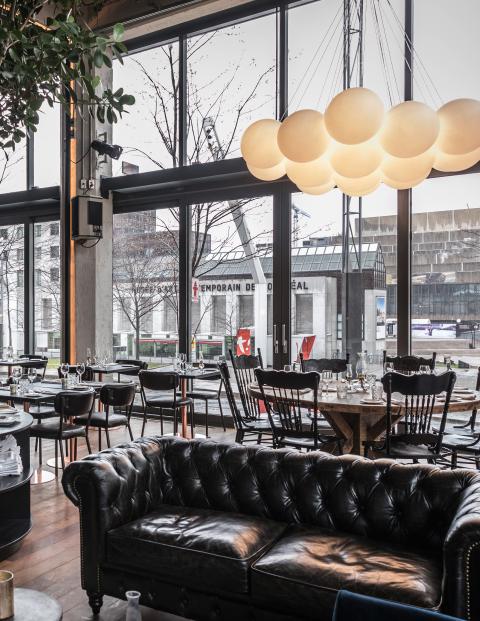 Le Blumenthal is a stylish brasserie located in the heart of Montreal’s Quartier des Spectacles, meeting place for the city’s numerous festivals throughout the year, including the world-renowned Montreal International Jazz Festival.

Located in a century-old building that was originally a men’s clothing factory, the new Le Blumenthal brasserie opened its doors in June 2017 after a major renovation. There was a  restaurant that inhabited the location before Le Blumenthal, described as a generic and cold space attracting business clientele for power lunches, or tourists passing through during one of the many weekend summer festivals. In contrast, Le Blumenthal’s mission was to appeal to local foodies who do the restaurant circuit year-round, with a farm-to-table menu offered by a well-known local Chef.  So, it was important to convey the “farm fresh” menu concept in the new design.

Enter gauleybrothers, a Montreal duo creating some of the most noteworthy restaurant environments in the city. Their idea was to craft an almost dreamlike rural scenario to contrast with the restaurant’s downtown core surroundings.  With floor-to-ceiling windows forming the 2 outside walls of the space, Toby Gauley says they were essentially creating a “countryside in a glass box” overlooking the Quartier des Spectacles. Old country chairs and wooden tables were sourced from barns across the province of Quebec. Plants fill the high open ceiling. And the designers included a full-size tree growing in the center of the restaurant.

Lighting was essential in contributing to the dreamlike countryside tone they envisioned. Glass walls mean the space benefits from significant natural light during the day. At night, they’ve kept the focus on minimal low lighting, and the restaurant utilizes candles on individual guest tables. But Gauley says they were looking for an iconic fixture that would the “pull the restaurant guest into the dream.”

The brothers’ inspiration was French photographer Charles Pétillon, known for his artistic images of white balloon clusters against unusual backdrops. The designers were inspired by one photograph in particular - a balloon cluster hovering in a softly-lit forest. The quest to achieve that same emotion with a lighting fixture ended when the brothers saw the Mika Bouquet from Eureka Lighting.

The Mika Bouquet is a dramatic cluster of 19 white spherical fixtures emerging from a single canopy ring. At over 6’ in diameter and suspended 6’ from the ring, the luminaire makes a statement. Each individual white ball is a diffuser for the LED light source inside, providing a smooth and gentle illumination, and the restaurant has the flexibility to control the ambiance day and evening with a dimmer.

The designers strategically placed the cluster above a large vintage round table that seats 6-8 guests, standing out from the traditional two and four-seat square tables that fill the rest of the space. In its corner spot, with the two glass walls as a back drop, the Mika Bouquet is not only showcased in the restaurant, but also serves as a stunning visual draw for those outside.

Gauley explains that it was always the design goal that the piece would be “Instagrammable”, with restaurant guests and passersby stopping to take a photo with the dreamy cluster.  And he believes that the Mika Bouquet has become one of the signature visuals for Le Blumenthal.  The gauleybrothers continue to receive a steady stream of pictures from people drawn to the standout lighting piece and the restaurant, either from the inside or out.