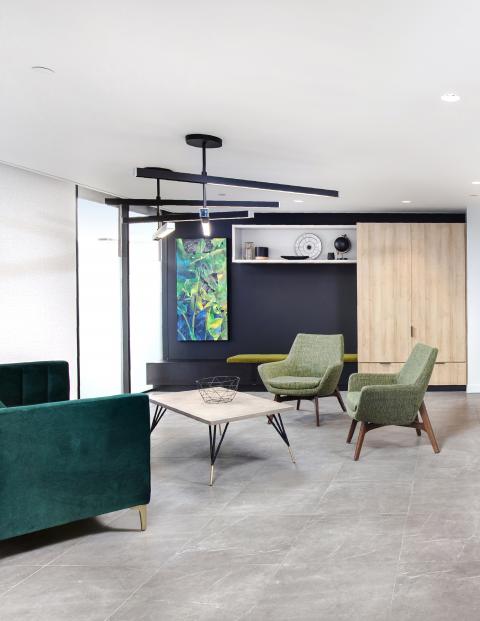 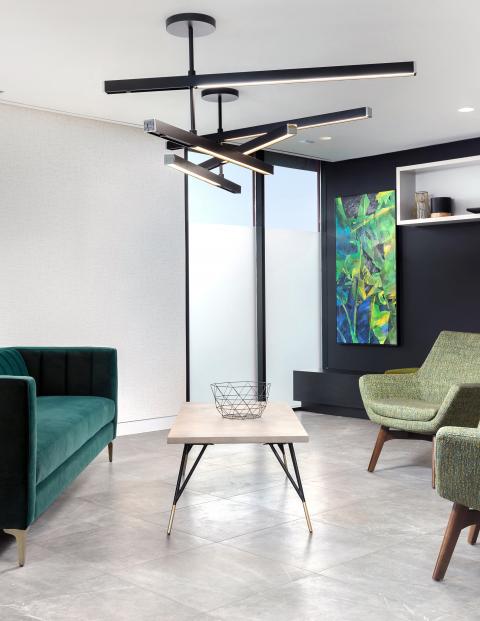 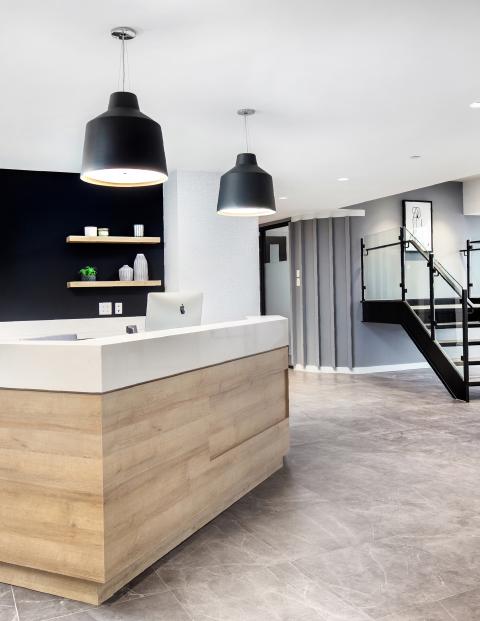 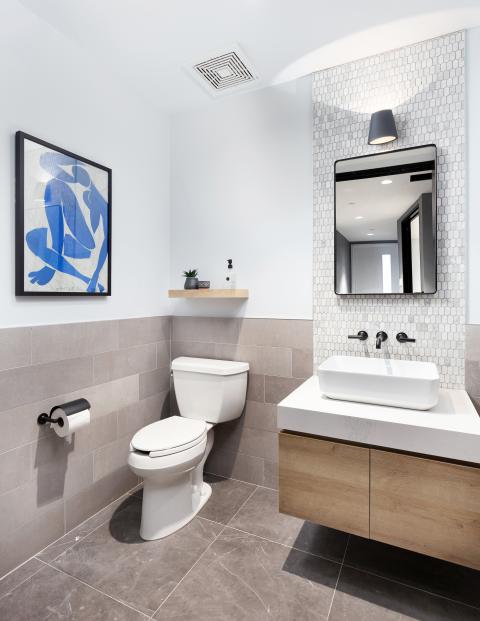 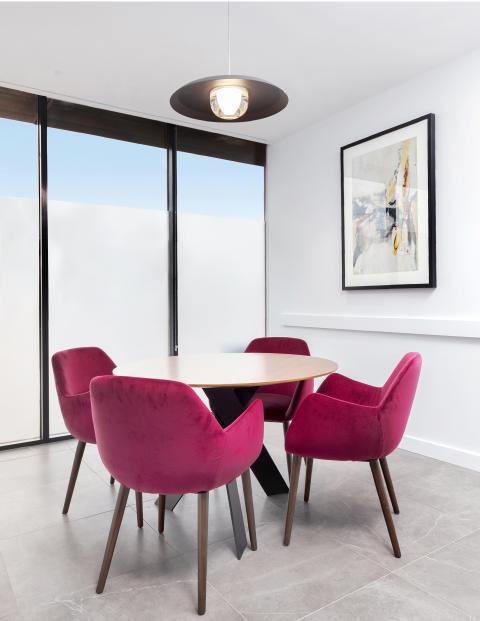 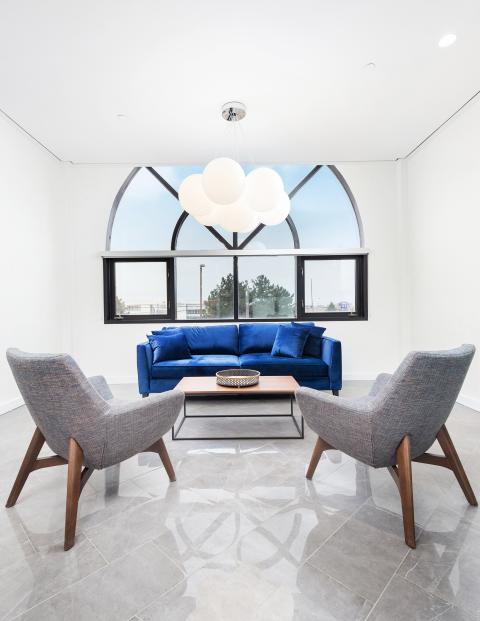 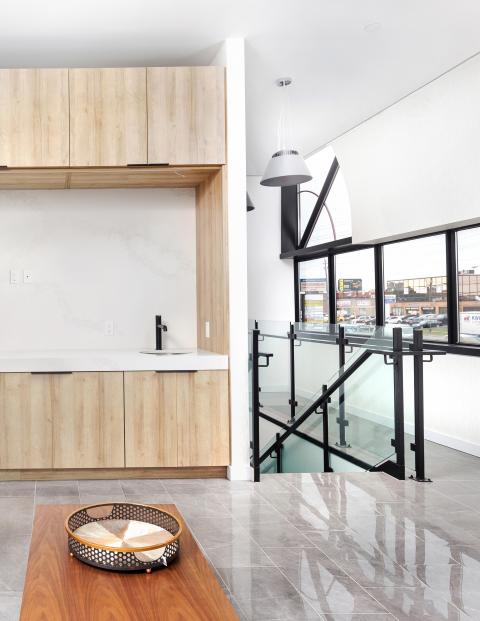 Weston Law Chambers, a group of seven independent lawyers purchased five units over two floors in a Woodbridge, Ontario strip mall. A strip mall location with former tenants that included a bridal salon; an atypical location for an atypical law firm. The group chose the new location because of its natural light, a stark contrast to its older, darker office. Architect Alessia Soppelsa was brought in to transform the space.

Soppelsa was given full design freedom in the client-facing areas including reception area, meeting rooms and washrooms, as well as the lawyers’ lounge.

The ceiling height across the two floors was low, presenting a challenge to achieving the open and inviting space Soppelsa envisioned. She focused on finding lighting solutions that would open up the area and accomplish the objective.

To distinguish specific spaces, Soppelsa sought unique, sculptural fixtures that would make each area pop. She found exactly what she was looking for at Eureka Lighting. After some time researching on the company website, Soppelsa opted for various Eureka fixtures to help her define the space.

Visitors are greeted with an open, modern reception area in soft colors of white, gray and pale wood.  Soppelsa chose two Valco fixtures to be suspended over the reception desk as the focal point of the space. Eyes are drawn to the unique, contemporary lines of the fixtures, and the industrial matte anthracite finish is a striking contrast against the white walls. The 24W custom LED light engine provides comfortable illumination to the reception work space below.

The adjacent waiting area showcases Eureka’s versatile Switch luminaires. A three-arm and two-arm version hang side by side, creating a linear sculpture over the contemporary couch and chairs. Switch’s custom designed LED module and high-performance lens offers efficient yet fully diffused illumination to the coffee table and seating area.

“I wanted the lighting in this area to be a showstopper. I was able to twist and rotate the straight bars of the Switch to create something very special,” Soppelsa said.

The office renovation involved gutting the 16,000 sq.ft. space over the two floors and introducing an open staircase just off the reception area. While the stairs are bathed in natural light during the day, the space tends to get dark in the late afternoon and evenings, particularly in winter. Soppelsa had envisioned a series of three suspended fixtures but was challenged to find something with sufficient light levels to ensure a safe, well-lit staircase while maintaining the aesthetic of the whole design concept.

Soppelsa worked with Eureka’s local agent, TPL Lighting, to find a solution.  TPL ran diagnostics and modelling to help her make the best choice, which was Eureka’s Turbo luminaire. The high output LED and compound lens in each fixture effectively diffuses light over the stairway below, providing safe and secure passage for employees and visitors.

Soft grays and natural wood carry through into the eight washrooms. Eureka’s Slant fixture is mounted over the mirror in each room, providing direct illumination to the sink below, and indirect lighting to illuminate the small space. In two of the washrooms Slant also accents a strip of mosaic tiling that extends from floor to ceiling. The industrial anthracite finish of the elliptical cone is consistent with the lighting aesthetic in the other public areas.

Lawyers consult with clients in one of five meeting rooms, each furnished with a simple but elegant set of table and chairs. The small rooms run along the exterior of the office, and benefit from floor-to-ceiling paned glass on the exterior wall.

Soppelsa selected the sophisticated Count pendant to be suspended in each room. The crystal core directs even illumination over the conference table, and the shade’s open top exposes the softly glowing crystal to provide indirect illumination to the ceiling. She was drawn to the beautiful lines of the wide-brimmed anthracite luminaire, which she described as an “umbrella that embraces the room.”

Privacy film covers most of the exterior glass panels but Soppelsa intentionally left clear glass between the film and ceiling.

“From the street you can see this modern lighting. It’s intriguing. It gets people talking,” said Soppelsa.

Soppelsa applied a similar design strategy for the lawyers’ private lounge on the second floor. A cathedral-style window faces the main thoroughfare, providing natural light for the plush, modern seating area. She selected Eureka’s Bouquet Mika luminaire, a cluster of seven spheres suspended from a chrome canopy that provide a warm even light across the room.

The dramatic luminaire makes a statement not only in the lounge, but beyond its walls. It is highly visible from the street, surprising passersby in this otherwise bland commercial neighborhood.

The combination of soft colors, natural light and striking sculptural luminaires invoke a feeling of confidence as you enter the office. The lawyers of Weston Law Chambers regularly receive compliments from their clients, and they could not be happier. The administrative team, too, appreciates the beautiful lighting, particularly in the shorter, darker days of fall and winter.

“Each fixture I chose is unique, standing apart with its own character. And yet when you bring them together in the same environment, they still feel like they came from the same family. Eureka was able to provide that for me,” Soppelsa said.